"Still Running Against The Wind"-- The 2012 Canyonlands Half Marathon 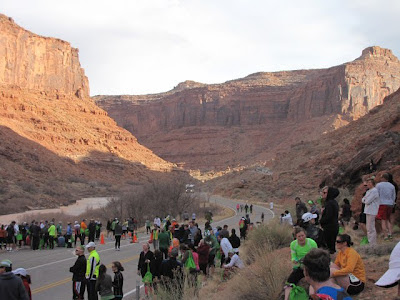 In a training cycle during which my focus had been on two ultramarathons rather than a spring marathon, my tradition since almost the beginning of picking up running, the Canyonlands Half Marathon weekend snuck up on me with little worry or overly nervous energy. My focus had largely been on long, slow trail miles on the weekends, supplemented by shorter weekly trail runs, and a weekly track workout. Though I was up probably a good ten pounds over my best racing weight, I felt calm and confident going into the race, and this was despite a forecast that looked uncannily similar to the 2011 Canyonlands Half Marathon.
Heat, high winds, and dust were expected, but I felt all the tools were in my bag this time around to make the most of the day. I knew the mistakes I'd made the previous year, how to correct them. I'd paid dearly for a "bombs away" first mile the previous year, never recovering and steadily crashing and burning down the canyon and onto the highway. I intended to show some restraint in the first mile, and run with a consistently hard effort rather than attempting to bank time, with just a little bit in reserve to be able to handle the highway in the wind. Our weekly track workouts back in Grand Junction also provided the opportunity to focus on form, and good race technique. I knew that in the wind I would need to regularly check in on my form, making sure the stride was short, and cadence high. Running with a slight forward lean, focusing on the area of pavement immediately in front of me, rather than down the road, would give me a huge mental edge in the wind as well. When I got up in the morning, it was warm and breezy, but just a beautiful morning. Boarding the bus to the start, I felt about as zen as I've ever been at the start of the race. I knew what to do, and the pressure was off. 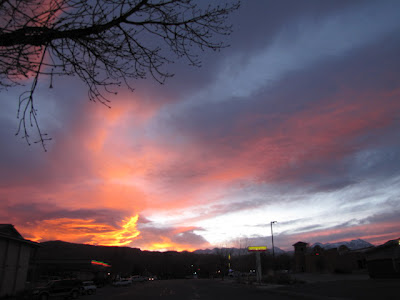 Getting off the bus at the starting area up the canyon, it was definitely quite warm, and breezy. Sometimes gusty. Ilana, who was feeling quite nauseous, wandered around with me, and we eventually made our way up onto one of the big boulders on the cliffs going up the side of the road near the race start. We eventually saw our friend Kevin on another large boulder, moved over there, and continued to acquire friends onto our perch. It was nice to unwind and joke around. I pulled out my iPod when I heard the Rocky theme playing-something I'd captured on the iPod the year before.

I also walked around and took many shots of people standing, sitting, leaning, or laying on the rocks, waiting it out until it was time to move up the road to the start. 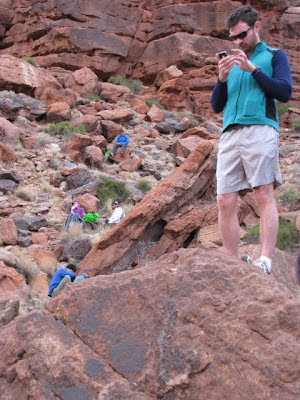 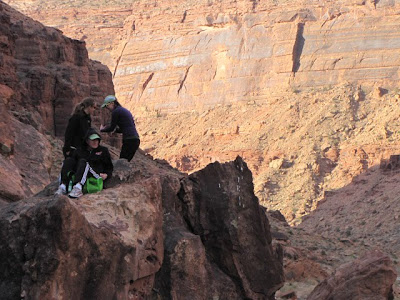 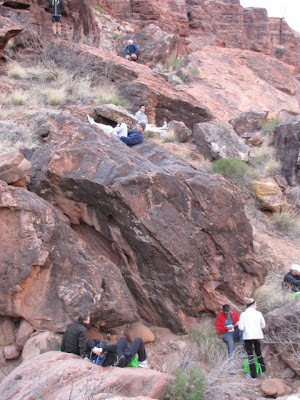 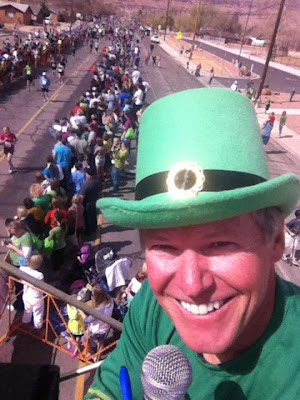 (added with permission from Jeff...he was quite the jolly Leprauchaun, and a brave one at that, to be up on the scaffolding in the wind))

This time, instead of shaking my head as I crossed the finish, I charged through with a big smile.
Final .14 miles as registered by Garmin: 1:03:7 (7:24 pace)
Final Garmin time:
1:43:31 (7:53 average pace)
This wasn't anywhere near a course PR, but given that my second- and third-fastest half marathons ever were run on this course in calm, cold conditions, and my best was a magical pixie dust run at The Other Half, I was stoked. These were not ideal conditions, I was not at ideal racing weight, but I prepared to race, and executed about as well as I could have considering all factors. When the official race results came out, I was surprised to see that I'd logged my highest placement ever in age group at this race, finishing 8th out of 359 in age group, 38 out of 1917 women, and 239 out of 3240 overall. My official chip time was 1:43:26, and gun time was 1:43:40. When it came down to it, I'd handled myself ably on the parts of the course that did me in previously, and was able to follow through on my intention to reign in on the first mile, and run a controlled, evenly paced race all the way through.
It was great, again, to be on the course with my friends from the "Running Abomination Of Grand Junction" (thanks Tom Ela for coming up with that answer to the "Running Nation of Flagstaff") and other parts of our region. We celebrated first-time finishes of some, high-placing finishes of others, and in still other cases, the victory of simply finishing with illness in tough conditions. This is the one Moab race where I have yet to score hardware, and this weekend showed me that it's within reach, and a goal to target and train for over the next twelve months. As always, the Moab race crew, volunteers, and race director made it another special day; the conditions made things challenging at their end as well, and I'd be remiss if I didn't comment about how they kept things moving and put out fires (not literally, but just about) right and left to make it a good day for racers.
After some rest and chillax time with friends, I headed back home, but not without stopping with the camera to see Moab off properly. I am looking forward to participating in the inaugural Thelma & Louise Half Marathon in Moab this May, and seeing how the next chapter reads on the roads in Moab. 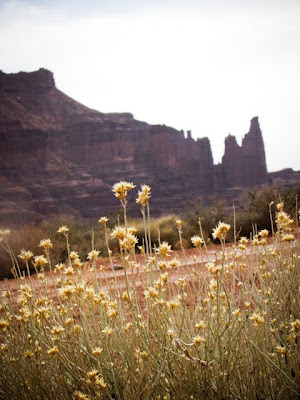 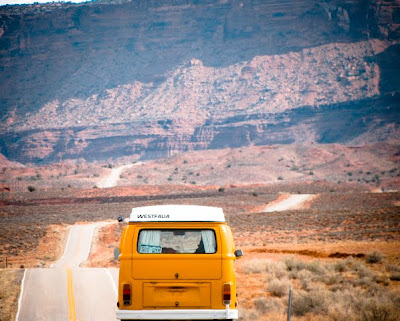 Posted by TiredMamaRunning at 9:14 AM 3 comments: 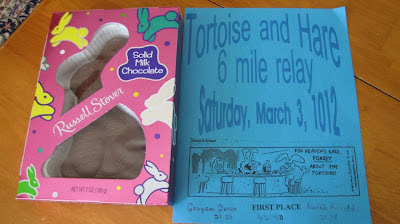 My observant middle daughter was the only person to notice that we'd apparently run this race in the middle ages, with the little typo on the date. Obviously, we runners were distracted by the chocolate.
It was turning into quite the nice day, and several of us made plans to do 2-3 hours of trails the next day. It was SO nice, in fact, that a lot of the racers headed down the road for extra cooldown. Grayson and Ben decided to go run the Tabeguache next on top of the race. I thought about both options, but with my IT band being a little funny since the RedHot, opted to skip anything extra today

Sun is shining,
The weather is sweet, yeah
Makes you wanna move your dancing feet
Getting up the next day, I was kind of dragging. It was set to be a beautiful day, though. I coffeed up, had some food, and still wasn't quite with it. This is the great thing, though, about track night, and with coordinating group runs with the Ultra Dogs and other friends who like to hit trails. I could have easily settled into the couch and done nothing for the day, but I kind of organized this puppy and wasn't going to back out of a group run now. Jerry, Grayson, Ben, and I all caravanned out to Mary's Loop (with Jerry and Grayson first heading the wrong way on I-70, ha...when Ben got them on the phone he said "I should have said 'head toward Utah'"), and we kind of lollygagged our way into starting, eventually selecting a route that would take us onto Mary's Loop, then drop down to Horsethief Bench (AKA Where You Might See Five Dozen Cows On The Trail Bench). I was in shorts for a training run for the first time this year, and started in long sleeves, but less than a mile in I peeled that off to wear the short sleeved shirt I had on underneath.
Everyone claimed to be "tired" and wanting to "take it easy," but I could see that was a bunch of B.S. today. The pace was a nice, steady clip. I was feeling like I was running sluggishly but the guys were really chugging along. This was good because I probably would've phone it in more on my own today, honestly. There's never an ugly day out at Mary's, but it was especially spectacular today, with each of us saying a camera would've been a good idea. I ran with Jerry for awhile, with Ben and Grayson running ahead, which was good because I kept him from steering off-course when it was time to drop down to Horsethief Bench. The guys all really started flying through here, and I upped my pace again, lagging about a minute back but still where I could see them. We made a planned "play stop" down by the river; Grayson got brave and put his feet in the freezing cold water, and I got good and muddy jumping back up from the riverbanks onto higher ground.
It was a little hard to start again now but I moved on along, with the guys now flying ahead. I thought I was dragging but then realized, hey, they're getting all testosterone-y and racing one another in training. Oh, okay. So I wasn't moving slowly after all. I wasn't going to join in racing the run, especially since they all top out at a faster pace than me anyway, but I figured it wouldn't hurt to push enough to keep just a minute or two back from them. I treated my run like a trail tempo run for a little bit but not worry about whether I'm right with them or not. I pushed along at a good pace for me, and as it turned out, I really wasn't all that far behind them.

Finishing out the run back up Mary's to our vehicles, I was glad we had a group going today. It took me about ten miles to warm up and really feel good in my running, but it was a great run with about 12 miles covered a lot faster than I would have done on my own. Ben said he'd realized it was the last time he'd have to run this trail really fast before Canyonlands and Desert RATS and just sort of started running really fast out there. We "feasted" on bananas at the finish, and then headed back to town, feeling that good post-trail run bliss that comes from the combination of sweat, dirt, sunshine, and good, all-over tiredness.
It is now just two weeks before the annual rite of spring for runners here; the Canyonlands Half Marathon. I ran an epically bad race there last year so anything *should* be an improvement. I would, however, like to turn in more of a redemption run rather than just improving upon a race where I really bottomed out. The Desert RATS 50 miler also looms around the corner, so training is going to be about walking the fine line to get in the miles for that, while still resting properly for Moab.
Posted by TiredMamaRunning at 9:29 AM 1 comment: 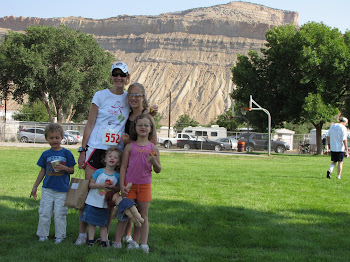